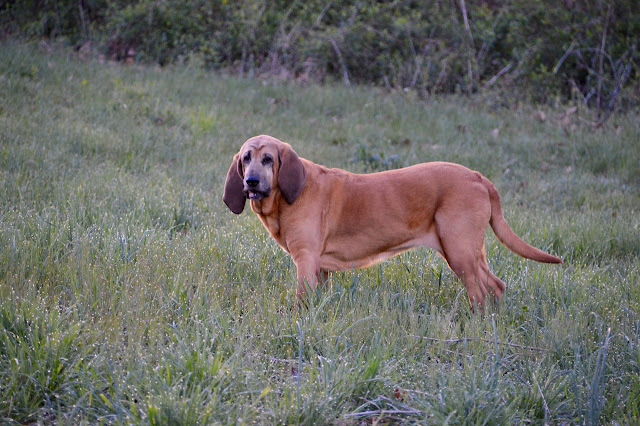 I made the mistake of leaving a window open plus a few windows had the screen windows down instead of the storm windows closed. That mistake did not fail to remind me just how cold it was last night. The living room thermometer was showing 58° ... big mistake.

So I guess we will be pushing those warmer temps out one more day before they start. It was still too nice to not take a walk with the hounds. With it below 70° Heidi stayed in bed, hidden under my Marmot sleeping bag. Sadie grabbed my left hand with her mouth and led me through the yard to the field, while Stella stopped to have some morning grass. 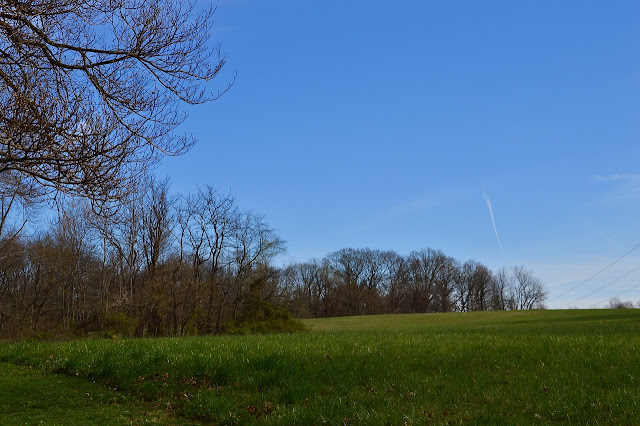 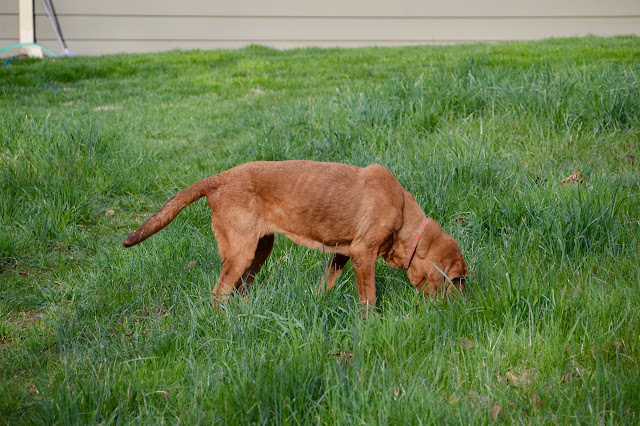 You can see how fast the grass is growing. It is not that tall all over the field but just in areas the hounds dumped their tanks over the winter months. I saw how cold it was when I stepped outside for the first trip of the day so this time I put on the Mountain Hear Wear down parka, my ski cap and a light pair of gloves for our morning walk. 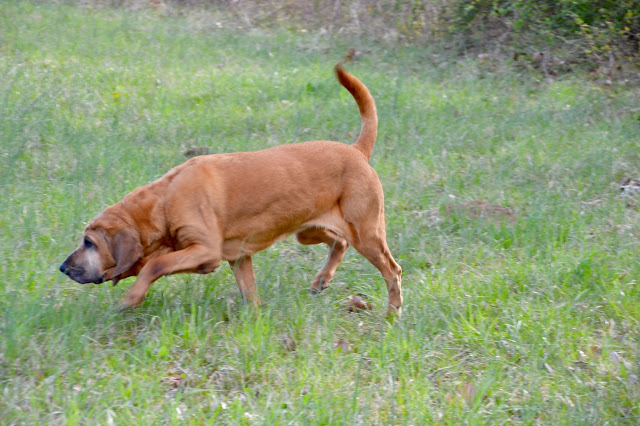 A few steps into the field Sadie released my left hand and took off sprinting in every direction possible. She was unconscious as she turned on a dime and moved in different directions back and forth across the field. Was it the cat or deer ? 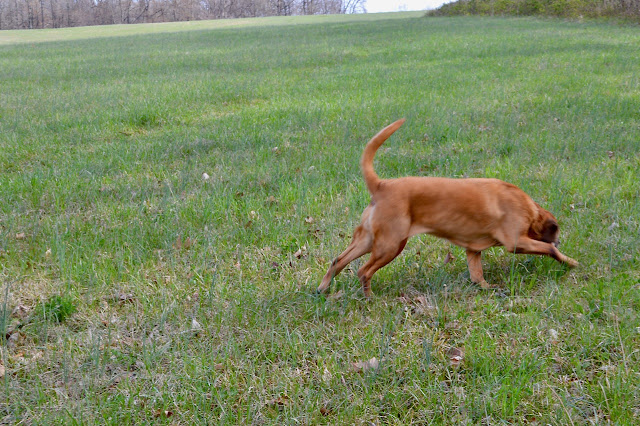 I turned to check on Stella and I was happy again to see her running. It wasn't important that she was running to meet me. It was important to see for the second day in a row that she was running after taking some time off. I was almost to the point of taking her to the vet for a blood test to see if she was sick, due to her lack of running. She loves to run. 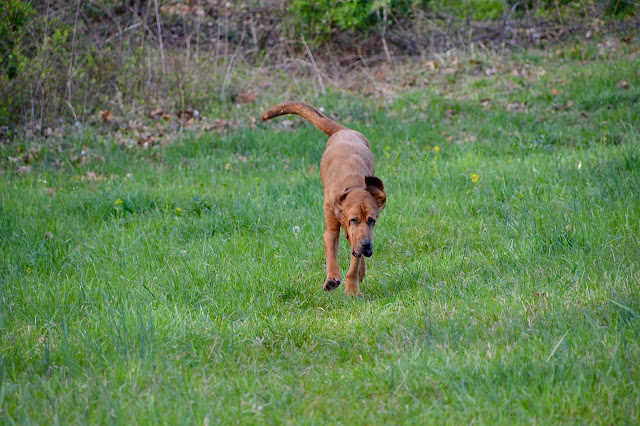 By the time I clipped off a few pictures of Stella, I turned to continue to walk and saw that Sadie was already close to the first turn. She was still going crazy with tracking scents, moving in short bursts of speed in different directions back and forth from left to right. 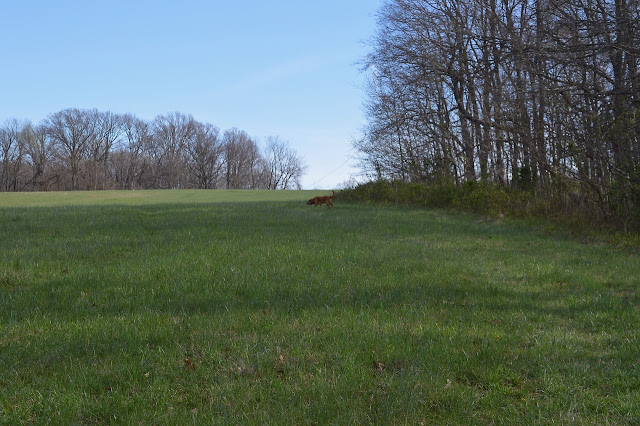 By the way Sadie was action I thought it might be possible for a deer chase this morning. That was fine with me, I would have let them sprint as far as they wanted or until they wore out but I would only walk to catch up with them. I found out there were no deer to chase, only their scent to track. 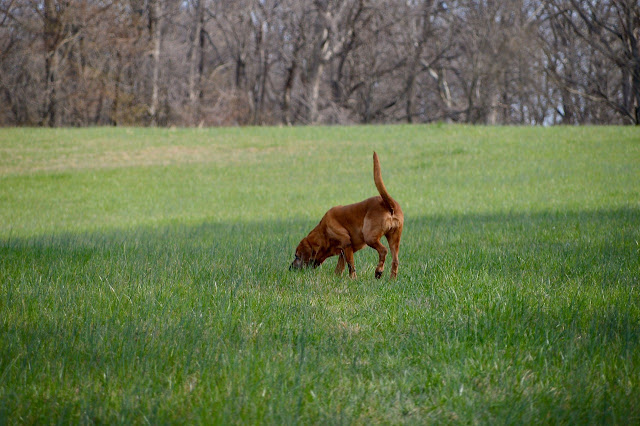 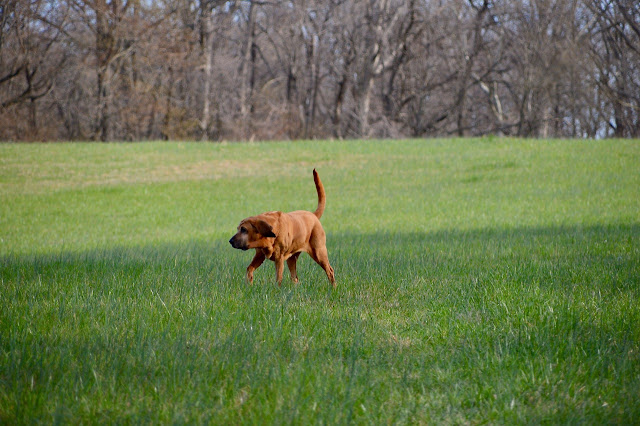 Stella ran past my leg at full speed toward Sadie. Then immediately ran into the bushes where you could see the deer had mashed some of them down to ground level. Stella was in deer heaven for a while. 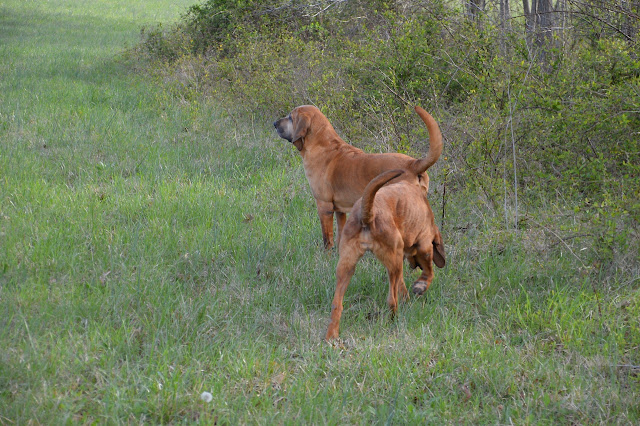 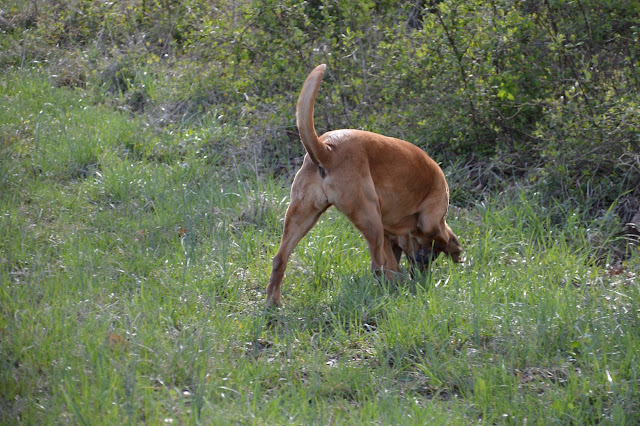 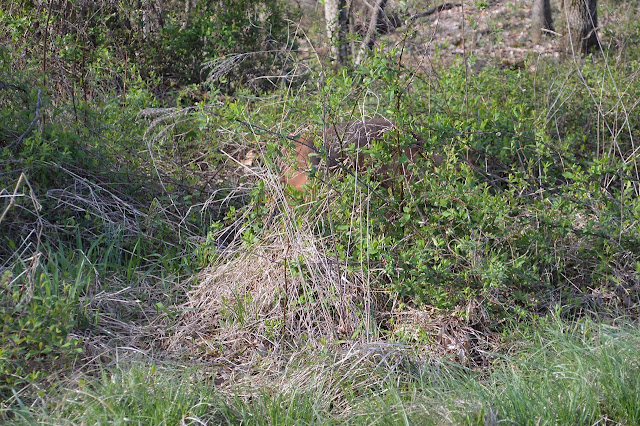 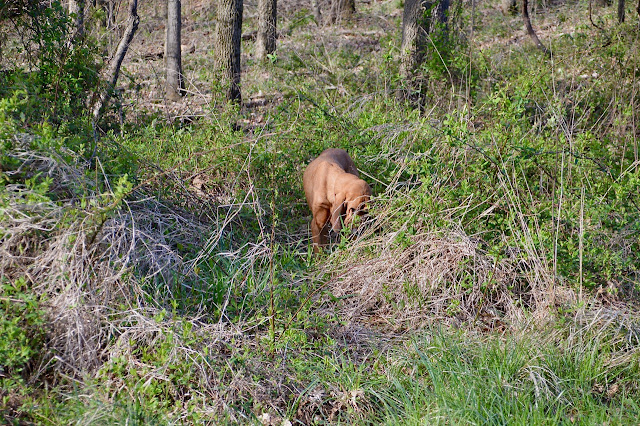 Once again, when I turned to continue the walk, Sadie had taken off for the far right corner and Stella was following at full speed. A first for her in what seems to be in months. I still have not looked back through the blog or her pictures just to see how long it's been since she has sprinted somewhere. 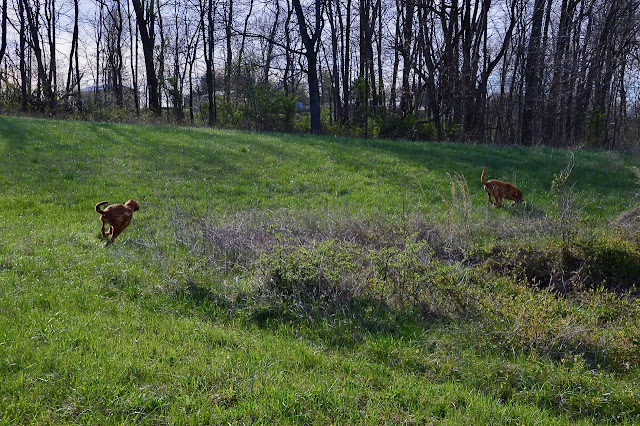 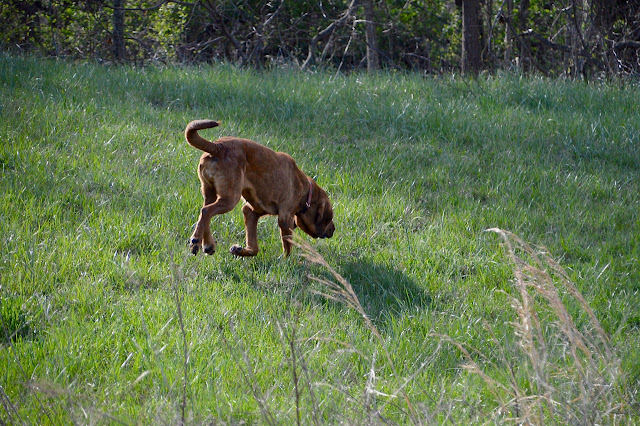 At this point I had to yell Sadie's name. She was on the move and was headed down into the gully. It would be nothing but deer scent, thick bushes and deep mud at the bottom. They can both go to the very edge of the gully but not down into it. 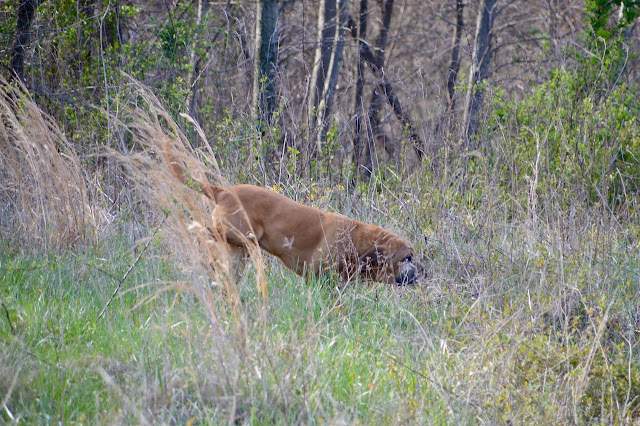 She turned immediately when she heard her name and took off down the back edge of the field. Stella and I could not keep up with her today. When her tail is curled and her nose is to the ground she is really locked into something and pays attention to nothing else while she is on the move. 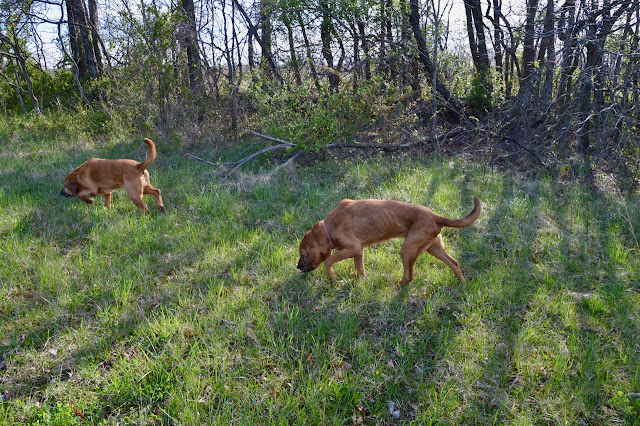 Stella decide she was finished trying to keep up with Sadie and went back to her own pace. 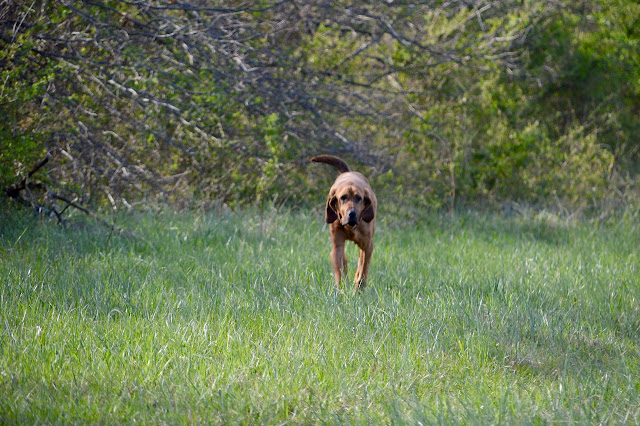 The field grass seems to be growing by the hour. There are a lot of new tall sprouts of hay coming up. It always seems if they do that second cut in the fall, there are less weeds in the following spring with a lot more hay to cut in June. 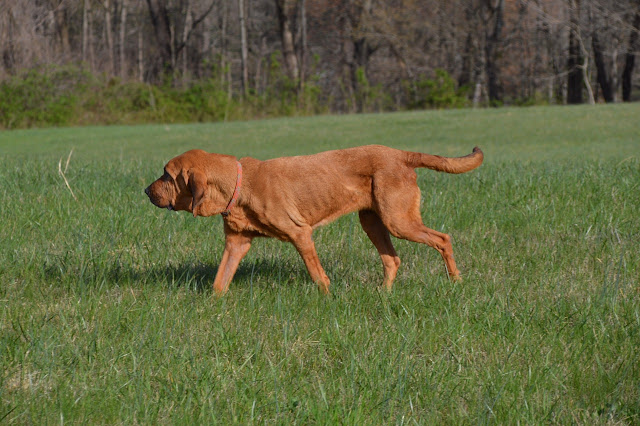 While Stella and I walked at our normal pace, Sadie continued to search and explore a long way in front of us. Her nose was to the ground all the way to the backyard. I let Stella hang back where she was in the field while I approached the house. She came running to catch up and had to check out what Sadie had found so close to the house. 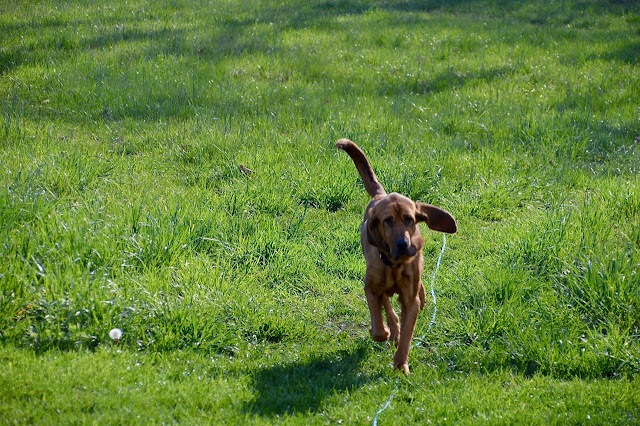 By this time and the area that they would not leave, I was pretty sure that big blonde cat we saw a few weeks ago by the neighbor's woods had paid us a visit while we slept. She also might be a great mouse hunter because it has been so long since I have seen a mouse inside the house, that I can't remember the last time. 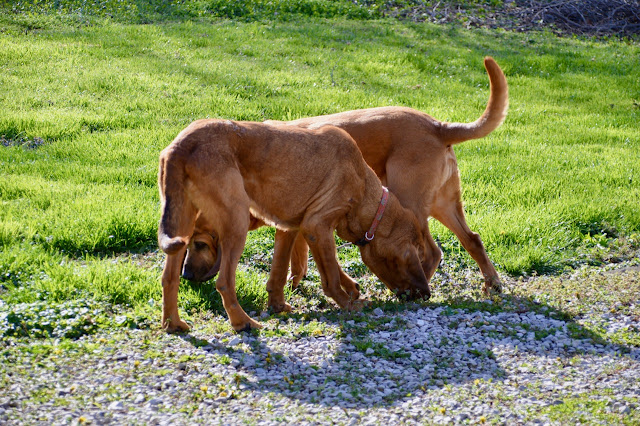 It's on the chilly side but it's a beautiful day today. We will get in another hound walk later, maybe even two more. I'm motivated enough to get some domestic things done around the house today and might head to the Chinese Buffet downtown for dinner tonight. Not only does it taste good, it's all you can eat for $8.

I don't know if you noticed or not but I edited my pictures different on yesterday's second post. I was going to say something about it but forgot until it was too late to mention. Instead of clicking the "enhance' icon in the Apple Photos program for each picture, I only clicked the "auto" under Sharpness. That kept the lighting and color as the lens captured the picture but tweaked the pictures just a little for a sharper view.

With today's pictures I did a little of both and some not at all. Sometimes the "enhance" will make the hounds too dark or the grass too bright green.

I called Exede customer service yesterday to verify what I was having done next Tuesday was okay for a current customer. The local biz that installed the dish in June 2014 will be changing out the modem and adding updated equipment onto the dish ... for faster download speeds.

Exede customer service told me I was getting a deal that new customer get, everything was fine and it was correct to call them next Tuesday after the changes are made to cancel my old account number. I forgot to mention yesterday, in addition of a $16 per month savings and more data per month, that on the 3rd month of billing they will give me a $50 credit. That will make my bill only $17 after taxes in July for 20Gb of date per month.

For those of you that live in rural areas or even in towns that have only DSL internet service ... I can tell you living up here on the hill I get high winds and severe storms at times ... my satellite internet has been more reliable than any DSL service I had before. It's very rare that I lose the satellite signal. My download speeds are between 12Mbps - 15Mbps.

That is all from 'the tropics' of southern Indiana.
By Steve at 9:08 AM